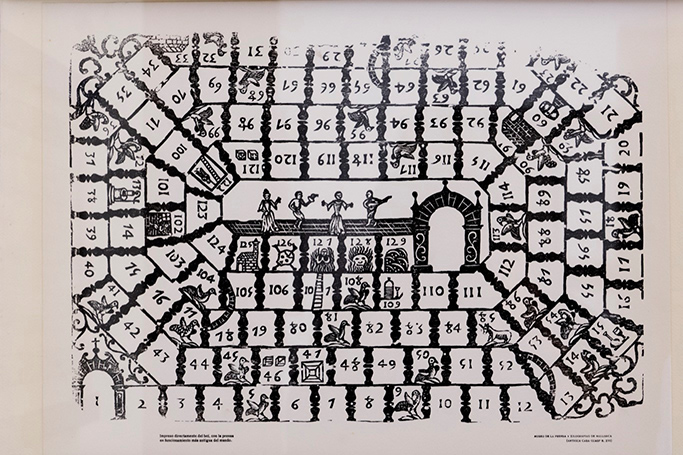 It is a print of the game of the goose made in the 16th century from a wooden plank worked with a gouge or burin to make the drawing and later impregnated with ink. There are several versions in terms of to the origin of the game of the goose, going through the one that places it in Greece during the siege of Troy in which they could use the “Phaistos disk” as a game board; the one that considers that this popular game was a creation of the Templars who were inspired by the Camino de Santiago; and the one that seems more accurate that places it in fifteenth-century Italy based on a text from 1480 in which it is spoken of by comparing it to some games played in the Middle East and Asia.

The game was used as a diplomatic gift. An example is the gift that Francisco I de’ Medici made to the Spanish King Philip II in the 16th century. Over time, pedagogical, political, and since the 19th century versions of commercial propaganda appeared.

If we accept the theory of Italian origin as correct, it would mean that the stamp of the Guasp printing house is one of the oldest surviving versions of the goose game.

This primitive press from the Guasp printing house is one of the best preserved from the 17th century in Europe. The inscription “any 1622” (year 1622) can be seen on the crossbar that crowns the wood where the press is activated, the exact date of…