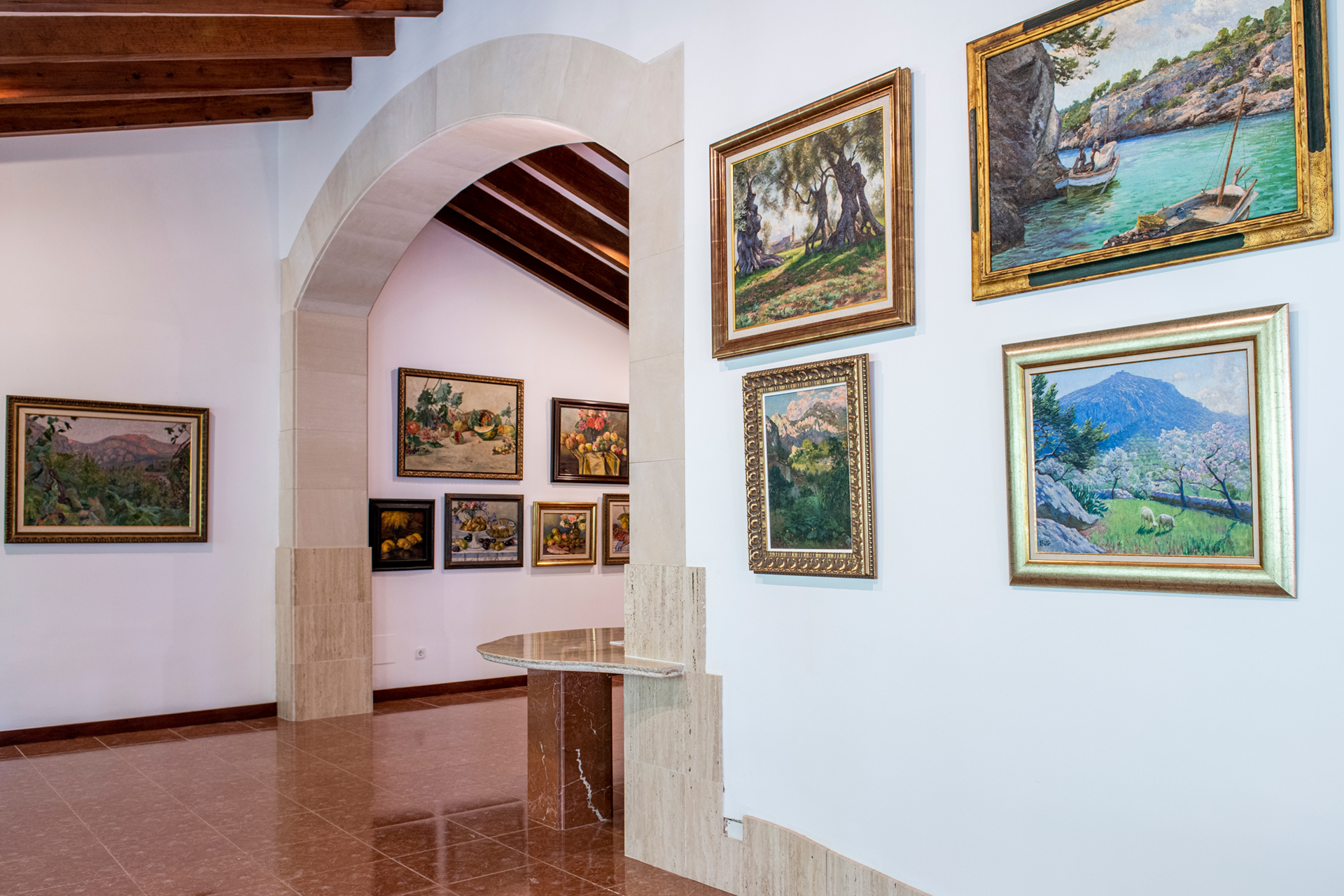 An outstanding disciple of Ricard Anckermann (1844-1907). Joan Fuster Bonnín held 30 individual exhibitions (Palma, Barcelona, Bilbao, Buenos Aires, Mahón), participated in 14 national and international Fine Arts exhibitions (Barcelona (3), Madrid (9), Marseilles (Gold Medal, 1903) and Munich, and similarly in 40 collective exhibitions in Palma, Sóller, Mahón and Barcelona. After his death, 12 tribute exhibitions have been organised (4 in 1970, for hundredth anniversary, 3 for the fiftieth anniversary of his death. Of special relevance is the exhibition at the La Lonja de Palma Building, 1995). His works can be found in the collections of the Balearic Government, Council of Mallorca, Palma and Valldemossa City Council, the Ministry of Culture (Mallorca Museum), the Bank of Spain, Caja de Baleares (Bank), Ministry of Defence (Sant Carles Museum), Es Baluard Museu d’Art Modern i Contemporani de Palma (Es Baluard Museum); the Museu de Lluc (Lluc Museum) has a painting by Santiago Rusiñol dedicated to Joan Fuster. He was a friend and colleague of Rusiñol, J. Mir, E. Galwey, H. Brugnot, G. Bergnes, E. Meifren, A. Gelabert, S. Junyer, among others. He painted illustrious personalities from Palma but also popular figures such as fishermen, peasants, spinners, the El dueño de Son Moragues (The Owner of Son Moragues), or the El Parado de Valldemossa.

Nevertherless, most of his work focused on extolling the Mallorcan landscape and the coasts of the island, especially the landscape of Valldemossa, where he lived for almost half a century, from 1898 to 1943. Likewise worthy of mention is the subject matter of the still lifes in bold colour studies (still lifes in whites, blues, reds, dominant greens).

His biographer M. Alenyar when speaking of the artist stated that he was: “Level headed, gentle, simple, modest and respectful, he had the ambition necessary to set himself exceptionally high standards of self-improvement and excellence. He was dyed-in-the wool artist, he was, more than any other painter of his time, a great master. He lived devoted to his profession body and soul, unconditionally, from sunrise to sunset.

He was exclusively devoted to the craft of painting, his profession, which was quite uncommon at the time and, above all, far from easy… He felt the pulse of the major changes that the world of painting underwent during his fifty-year career. He paid close attention to the process of artistic renewal that unfolded on the island. He was interested in any innovation. He wanted to understand those innovations, with no exceptions whatsoever, to follow up on and to take advantage of these to the fullest extent possible. He left behind a testament of a fruitful life, seasoned with work, modesty, simplicity, love of the land and excellent. He likewise left the legacy of an extensive, wide-ranging and diverse oeuvre, which eloquently summarises the complex history of fifty years (1894-1943) of the intense evolution of painting in Mallorca.”

And his grandson Joan Oliver i Fuster writes:

“Today, when I retrieve for my fellow citizens, and especially more so for my family and for the people of Valldemossa his work, I realise that, nevertheless, the artists’ work possesses a fascinating quality. It is the artist’s ability to send a message of hope, of love for nature, for beauty, for traditions and memories; for the land and the people who have given us so much.”